Allegro vs Amazon. A clash in the Sokoh Valley.

You are here:
News 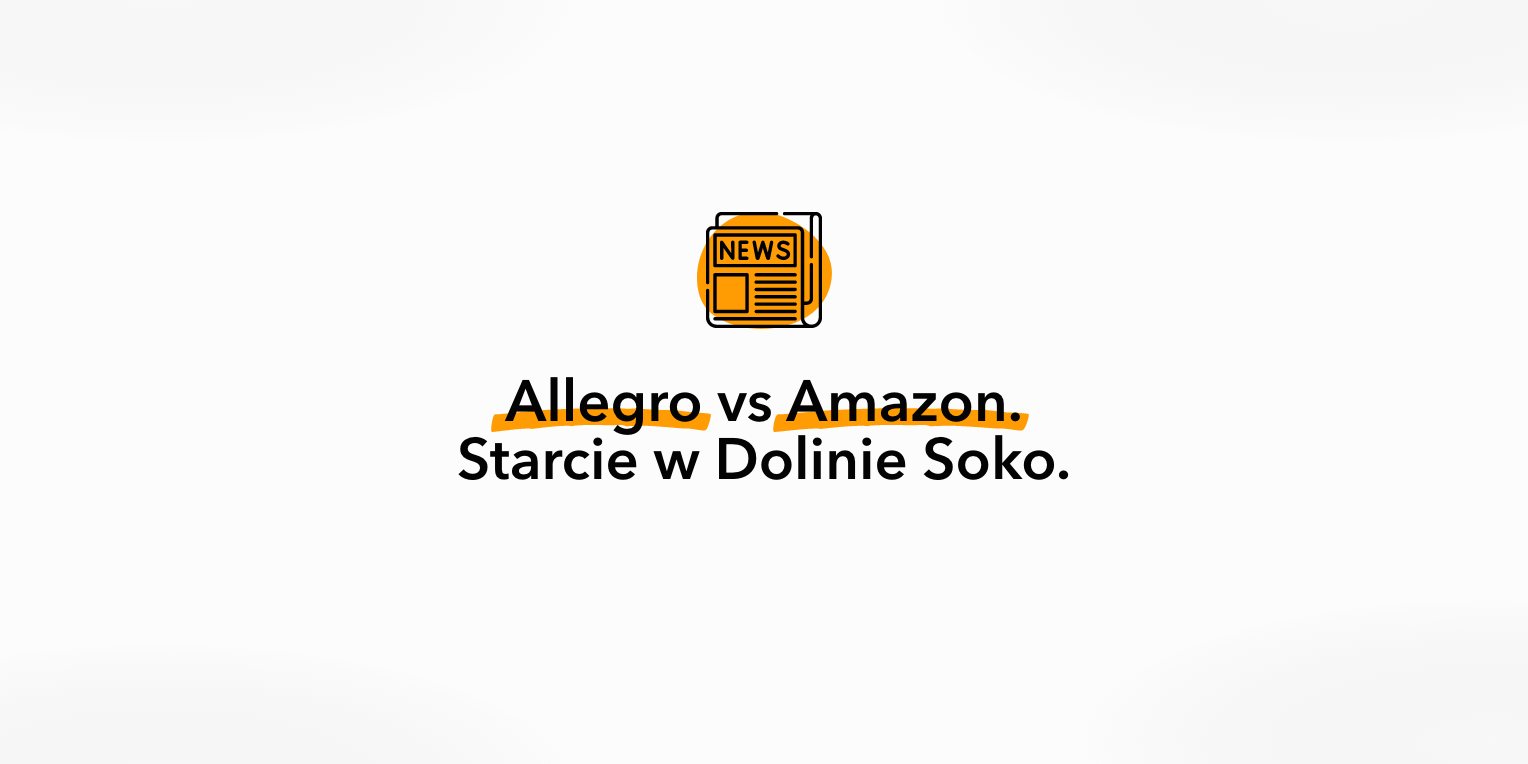 The long-awaited news was made public last week – Amazon officially announced its entry into Poland as a sales platform. Amazon has been preparing to make this move for years, building its infrastructure in Poland, but it is not a strategic decision for the giant from the point of view of the overall business.

On the other hand, it is a very serious threat to Poland’s Allegro, for which it has been preparing for years. Without demonising Amazon’s power or belittling Allegro’s position in Poland, the analogy that springs to mind almost immediately is that it is a prelude to the biblical battle between David and Goliath in the Valley of Sokol. Is Amazon too confident in its position? Can Allegro win this clash by relying on its business savvy and market knowledge, and finally, what will the battlefield look like once it is over? History likes to repeat itself, but will that be the case here?

First of all, the battlefield – the Market!

The Polish e-commerce market is a tasty treat for Amazon. With a population of 38 million, an e-commerce value of EUR 22 billion and double-digit year-on-year growth rates, prospectively it is a promising market. From a wider European perspective, the Polish e-commerce market is “only” 26% of that in Germany or less than 10% of that in the UK. One could automatically make the crowning argument for comparing the Polish market with the markets of Western Europe – Western markets are more mature, stable, with steady though lower growth dynamics. Nothing could be further from the truth. The pace and pattern of growth does not have its own “metre” and new bars are set by changing social habits and accelerators, such as COVID-19. British e-commerce in 2019 grew by nearly 15% and French by about 11%. E-business does not yet have its formulas, specific pace and patterns.

For Allegro, Poland is the most important and de facto only market. Unsuccessful attempts to enter the German or Czech market have ended in failure. In Poland, however, it has successfully maintained its leading position for years, accounting for nearly 65% of Polish e-commerce in 2020, according to the Gemius report. This is undoubtedly a great result and strategically well positioned for the upcoming duel. Amazon, however, has already set up its camp in Poland, prepared for the launch, but also does not approach Poland as a strategic direction per se, but only as another outpost for the expansion of its multi-level empire.

Second – a review of Amazon’s strategy.

When Francois Nuyts became Allegro’s CEO in August 2018, it became clear that Allegro would spend the next few years preparing for Amazon’s entry into Poland. Francois Nuyts ran Amazon’s business in Italy and Spain for nearly 7 years directly before Allegro. It was a good decision for Allegro, which was followed by a number of positive changes:

widening the options for delivery and collection of orders,

further requirements and restrictions for sellers, which have raised the quality of the buyer experience

Allegro’s development in recent years has been directed at further strengthening its position in the market, even broader outreach and tools for sellers and customers. These efforts have had the intended effect, but there was nothing spectacular or innovative in them, rather it was a duplication of existing solutions on the market. Allegro Smart, Allegro’s flagship programme, is a heavily discounted version of Amazon Prime or Ebayplus. Allegro is just starting out, for example with the Same day delivery programme, it is not implementing or investing significantly in its own solutions in terms of logistics, Last Mile delivery or its own pick-up points. The relationship with inPost has obviously brought many benefits to buyers, sellers and InPost itself, and probably least of all to Allegro itself. After a successful debut on the Amsterdam Stock Exchange (well done Rafał Brzoska) and the collected investment capital, a wide network of parcel machines and courier services, as well as dynamic R&D, inPost becomes a partner entity for Amazon, with which it has already signed an agreement. Allegro has thus surrendered the forefront of the logistics battle, which is one of the most important drivers of today’s e-commerce.

Amazon is significantly ahead of Allegro in this respect. With dozens of logistics centres in Western European countries, ten of which are already in Poland, it offers huge opportunities for sellers to reach and scale their businesses. Companies that are not ready to operationally serve B2C customers can take advantage of the Amazon FBA programme, place their products in Amazon warehouses, thereby outsourcing outbound logistics, including cross-border – to Amazon. The invoicing process for individual orders can also be outsourced to Amazon (free of charge) and it will even help with VAT settlements in individual countries. Such solutions were not needed by Allegro, which operates almost exclusively on the domestic market.

For Amazon, however, Poland is not an end in itself. On the one hand, Poland already serves as an efficient link in the supply chain for customers in DACH countries, but on the other, and more importantly, it will become Amazon’s bridgehead for further geographical expansion into Lithuania, Latvia, the Czech Republic, Slovakia and perhaps even Hungary and Ukraine. Of course, the more successful Amazon is in entering the Polish market, the easier further development will be. Despite the fact that the platform itself gives the impression of being unclear and perhaps even “UX” obsolete to a large part of the market, the values for the buyer, security, the breadth of the product offer and the pricing policy and logistics that Amazon possesses are impressive and give it a strategic advantage not only over Allegro, but the majority of current e-commerce providers.

With a spontaneous brand recognition of 86% in 2020 and 20 million monthly visitors, Allegro’s position in its home market is definitely stable and well established. In terms of solutions beyond the platform itself, the Allegro group also includes Poland’s most popular price comparison site Ceneo.pl which additionally aggregates traffic and data for Allegro.

Amazon in this respect shows its image of a true business behemoth. Allegro’s asset level at the end of Q3 2020 was at 1.4% of Amazon’s asset value, and the difference in market cap between Allegro and Amazon is 98.7%. Amazon has an extensive network of “Amazon FC’s” warehouses, selling its own products in a distribution model, over 100 of its own product brands, Amazon Video, over 500,000 people employed, its own transport logistics (internal and last mile) and on top of that a number of satellite businesses including Amazon Web Services, which is delivering record profits year on year, allowing other business lines to grow and providing them with the highest level of technology support – this is briefly Amazon’s weapon. Overwhelming.

Looking solely at the Polish market, it is definitely Allegro that has the edge over Amazon. Allegro is widely recognised in the minds of individual customers, for thousands of retail and manufacturing companies it is one of their sales channels, and it has recently been widely publicised in the context of its successful listing on the Warsaw Stock Exchange and joining the WIG20 index.

Allergo was a pioneer of e-commerce in Poland. It grew organically, along with ecommerce awareness in Poland, adapting to user requirements and creating opportunities for sellers. One can question Allegro’s limited expansion activity, but their position as the undisputed leader on the domestic market cannot be taken away.

Amazon, on the other hand, is hardly a recognizable e-commerce platform for the average Polish user and is often perceived only through the prism of FBA warehouses scattered across Poland. The handling of sales on Amazon can also cause minor problems at first. It can take months or years to communicate and embed Amazon values in users’ minds. However, the factors that can easily appeal to the Polish user and dethrone the advantages of Allegro are the breadth of the offer and the prices. Amazon.pl’s offer will aggregate offers from sellers not only from Poland, but from all over Europe and beyond. Finding a niche book in English will no longer be a problem, and accessories for the latest smartphone will be available from the day of its world premiere. On top of that, prices are often lower than those offered in Poland thanks to the product range organised by EAN codes, price monitoring by Amazon, and Amazon’s own sales thanks to the Amazon Vendor Central programme.

The clash of Amazon vs. Allegro

Comparing Allegro and Amazon on the Polish market to the fight between Goliath and David may be considered sacrilegious, but it captures the climate that has been created around Amazon.pl and Allegro. Both platforms are now at the stage of calling for a duel and spreading PR.

Allegro has a leading position, loyal customers and broad reach. Is that enough to knock Amazon out in one blow? Not likely.

The clash between Amazon and Allegro is not likely to be a spectacular duel of titans, but a long, arduous fight for the market, categories, segments, shares – until one of them “bleeds out” or gives up the market. One thing is certain, we have an interesting time ahead of us.